Enter the MovieZone! With Ronal

On Thursdaynight I went to the kick-off from MovieZone Presents, a new programme from MovieZone in which new movies are put in an extra spotlight.The movie? Ronal the Barbarian. And. It. Was. Awesome! I honestly laughed so much I cried. It's definitely a movie a lot more people should go see.

First things first
Before we started with the film, there was a short introduction. Not only about the movie and what makes the movie so special, but also a little bit about MovieZone and what it stands for. We also got a treat: Before the feature film we got to watch the short animation film Aalterate by Christobal de Oliveira. A really unique and special short like I've never seen before. Oliveira won the MovieSquad HAFF Award 2012 at the Holland Animation Film Festival (which is held every year in Utrecht). It was a beautiful movie that leaves you thinking about what you've just seen.

If you want to be fully surprised, just watch this teaser and stay away from the trailer!!!

Ronal Rules
Back to the main event: The movie we came to see. How do I even start? It's hilarious. Ronal the Barbarian is an Danish animation film (we watched it dubbed - the American version) about Ronal. He is a Barbarian, but due to a mishap in the past he is the only one of his tribe that has no muscle at all. He has a hard time holding - let alone swinging - an double sided axe and can't press weight. Yet after their village is attacked and all the Barbarians were taken - except for Ronal - it is up to him to free his family. A queeste of his own! Except that Ronal doesn't like questes - because you can die in them - so it's not a quest, and if it was, it's still his so he makes the decisions and he is the leader. At least, so he says to his new made friends. A bard who wants to help him, a warrior woman and an elf. Together they set off to save the Barbarians.

What's so funny? It's full of references to Lord of the Rings and other jokes. It's been years since I've watched that trilogy, but it's still hilarious. The way the Barbarians are, and the elves. Pretty much everything is funny. It's also not a kids movie. In the U.S. it got rated above eightteen and in the Netherlands pretty much all the warning icons are used: there's drugs, bad language, sex, alcohol, fighting, you name it. So fair warning: Not s0 much for kids ;-). The babes, balls and muscles are almost too much for the screen to handle, but it sure works in this picture. The movie looks great and you can just see how much fun the team behind it must have had during the process.

Just to give you a little taste, I would advise you to take a look at this site with many clips: www.ronalthebarbarian.com. However, if you are sure that you want to see the movie, it might be more fun to let yourself be surprised. I didn't even watch the trailer before I saw the movie. But if you are still having doubts, this site will make you change your mind, for sure! 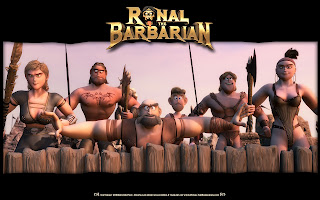 All in all I'd say that MovieZone Presents was a success, even though the turn up wasn't all that. It still needs to grow and I really hope it does, because I could really go for an evening like this every month! So bring it on ;-D.
Gepost door Unknown op 11:19