In a lot of movies and series there are people who make the wrong choices. Their excuses are usually that they 'didn't have a choice'. Which is the weakest excuse ever, because you ALWAYS have a choice.
Situations and lies
In high school series it has to do with choosing between love, friends, family, homework, parties or other teenage things (or vice versa). When it's a show about twenty or thirty something people it's between your loved ones and probably work (or what you are willing to do to get a job or a boy/girlfriend). People get caught in lies and don't know how to get out of the situation. It usually escalates into this big thing where the characters scream at each other and the friendship is (momentarily) broken. The beauty of such shows/movies is that it takes you with the story and gets you to see the situation in the light of the character.
Everybody knows that it's not good to lie, but people still do it. At that point you make a choice. Actually your life is full of choices you probably wish you wouldn't have to make. Whether it's about choosing between clothes (to buy or wear), software or computers and such, it's all about choices. The wrong choices also lead to guilt or negativity. The more important choices have to do with your lifestyle however and the kind of a person you want to be.
Staying true to yourself
When you are given a hard choice it gives you the opportunity to self reflect. In series/movies it's about a fictional problem where a lot depends on it. Especially in soaps, such as stealing money to pay for your mother's medical bills. In real life it's more low key. Like telling a friend what you heard others say about them, or maybe about choosing to go to friends in stead of your sisters birthday party. When you make a choice like that, you consider how it will effect those involved and you try to do the good thing.
There are some bigger problems/situations where people get in way over their heads. When they are in such a position they might think that they don't have a choice. But they always do. I can't think of a good example from my own life, but maybe something like people discriminating others, or harrassing or hurting them. People who buy a gun and end up shooting a mall full of people... (the last one maybe is a bit extreme, I admit. But it has happened, though I would think they have psychological problems, so their situation is different). They all have a choice. Namely to be the better person, to be better than that. You can choose not to fight (like Ghandi) and take whatever comes next. It might be hard, but at least you know you were being true to yourself and you don't have to feel guilty.
Buffy and it's amazing writers (SPOILERS!)
As I said before, I get inspired by shows. I always wanted to write something about choices because of two episodes of Buffy the Vampire Slayer. In this light I also want to share these beautiful moments here.
The first is the from the episode 'Lie to Me' (2x07) where Buffy's old high school crush comes to visit. As it turns out, he wants to become a vampire and is willing to sacrifice others in the proces including her. You soon find out that this guy, Ford - Billy Fordam - has a brain tumor and that's why he is doing all of it. He wants to stay young and live forever. So Buffy tells him "You have a choice. You don't have a good choice, but you have a choice!" It really hit me, because people use this as an excuse all the time. And it's so true. Even the hardest choices come down to it and what you are willing to sacrifice to make that choice. 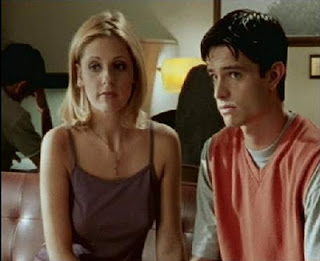 The second moment is in the tenth episode of season three ('Amends') when Buffy and Angel have a fight. He thinks the world would be better of without him, so he is waiting for the sun to come up (and let it kill him, because he's a vampire). Here are some quots from their argument:
Angel: "I'm weak. I've never been anything else. [...]."
Buffy: "You're weak. Everybody is. Everybody fails. [...] Angel, you have the power to do real good, to make amends."
[...]
A: "Buffy, please. Just this once, let me be strong."
B: "Strong is fighting. It's hard, and it's painful, and it's everyday. It's what we have to do, and we can do it together."
This also made me think of choices, because a lot of the time the right choice is the harder choice. You could end up hurting someone or yourself in the process. So you have to fight for what you believe and be true to yourself. And I guess it all comes down to the question about what kind of a person you want to be and relate that to the choices you make.
(sorry, I couldn't find one with better quality)
P.s. There's also an episode called 'Choices' (3x19). Maybe I should have mentioned that one as well, but I thought my blog was long enough as it is. It's a really good ep as well, so be sure to watch it if you are interested ;-).
Gepost door Unknown op 12:29 Geen opmerkingen:

As mentioned before, I have a couple of new years resolutions. The first one is lame in the sense that I don't really do new years resolutions. I think it's better to come up with different things to live a better life instead of just thinking of doing something for a while. Things I would love to do is do more volunteer work and live healthier. I already started with the last one.
I wouldn't say that I'm a vegetarian, but I try to eat as little meat as possible. This is for several reasons, one of which is that I don't like the idea of eating meat. Whenever I eat meat (and I know what kind of meat it is) I see the animal it used to be and I can feel it when I chew on it... Which I really can't stand. It's awful and I don't like it, because it gives me a very bad feeling. I like animals, but I never had any troubles with eating meat on bread or at diner, but when I start picturing it, I can't enjoy it anymore. Which is ultimatly a good thing, because I also believe it's healthier to eat no meat. Other reasons are the ways in which the animals are treated, the way we as people mass consume and that producing it as food is actually bad for the environment. Just to name a few. I actually became a vegeterian, because my mother was one and we didn't eat that much meat anyway. Then my sister went in that direction and I started to learn more about it and it got me thinking. I found myself ordering less meat in restaurants than usual and not eating that much meat at home anymore either. When I went to live on my own, I realized that I would never be able to make any kind of food that was animal. I get sick just thinking about having to cut into meat or boiling it... All in all, I'm very glad about my decision to eat as less meat as possible, however long it may have taken me to get here.
But there is still a healthier way to eat, namely veganism. This is something I am new at. And I'm not saying that I'm going to lead a total veganism life, but I think it is good to try it. And by that I mean, I will try to eat as a vegan at least once a week. The thing is, to eat vegan, you really have to know what you can and can't eat. You start to think about what kind of ingredients are in your food and believe me: You do not want to know all of it, because then you would probably not eat half the stuff you are eating now. So I have a lot of work ahead of me and I'm very excited to do it. I mean, who knew there is fish in wine? Or that there's a lot of 'poison' in foods that actually make you fat. So by eating healthier, you'd be eating less poison, and more natural products. It's kinda recovering the art of making food yourself. If all you have to do is add water, it's easy. But you don't know what you are eating, it's done pretty damn fast and you can't really take any credit for preparing diner. If, on the other hand, you take ingredients, natural products/vegetables and such and you make something from scratch, you can take a look at the end result and be proud of making something delicious. All by your own making. And I'm really looking forward to trying some of that!
Gepost door Unknown op 20:41 Geen opmerkingen:

Will it ever end?
Pain
Agony
Something burling inside
It’s torture
Everyday
All the time
Never lessens
Never fades
It drives me
and holds me back
I want to scream
Throw things
It makes me angry
Makes me mad
Unhealthy
Frustrating
Will it ever end?
Gepost door Unknown op 23:44 Geen opmerkingen:

It's been a while since I last wrote something, and that's mainly because a lot of things happened. Not only did I move, but, like many others, I celebrated Christmas and New Year with my family. So I've been busy. Right now I'm back in my room again and I am waiting for some feedback/comments on my first version of my thesis. I'm hoping to graduate in January, so fingers crossed!
One of my new years resolutions is blogging more and continue writing (and hopefully finishing a story for once). I also hope to find a job... kinda soon actually, because I'm starting the new year with some money problems. If I can't find what I'm looking for, I'll just have to find something else to do for a while. Speaking of those resolutions, in the upcoming blogs I will name a few of them and my outlook on it.
This is all for now. Not very interesting I'm afraid, but hopefully in the upcoming weeks, it will be again ;-).

If anyone is looking for some good shows, I just watched the latest episodes of Leverage, Rizzoli & Isles and Pretty Little Liars. So if you are looking for some nice shows to pass the time with, I would really recommend these.
Gepost door Unknown op 21:44 Geen opmerkingen: