Why I love wednesdays

So, I'm just feeling very happy right now thinking 'I love Wednesdays'. So much, in fact, that I wanted to share it. Now that doesn't really make any sense but here it is :P. LOL. The reason why I love it has two reasons, namely: Glee and Ringer. 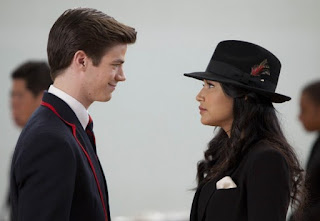 Glee
Glee is a musical/comedy/drama kind of a series. I started watching it a while ago (but a little after the first episode aired), because I LOVE musicals! And I fell in love with the concept of a show that would have musical numbers in it. Seriously, why did we have to wait so long for this? There are many shows that have a musical episode, such as Buffy the Vampire Slayers 'Once More with Feeling' or Grey's Anatomy's ep. Anyway, I fell in love with the show. Partly because of the amazing songs, but also because it's a series about the underdog. We didn't really have those groups in high school, but I've always felt different so I could relate. I also loved the cast. There was a gay character, played by the amazing Chris Colfer. And there were the popular girls, the jocks, many ethnicities, a 'bigger' girl and a guy in a wheel chair. So you pretty much had it all. A lot of the eps are funny too, though I can't say that I love the storylines that much. I do like the characters, but not all the time, because they go back and forth a lot. So in short: I love the show, but I don't love it entirely. The shows airs on Tuesday in America, but unfortunately I don't live there. So I have to wait and I watch it  the day after. And that is why I love Wednesdays. Today I watched the episode 'Michael' and it truly was amazing! After watching an episode of Glee I (pretty much always) feel very happy.
Ringer
Number two is Ringer. It's a show that is way to complicated to explain, but I absolutely love it. It's very soapy, but very exiting, and I just can't get enough of it. There is so much going on and it has a lot, and I do mean A LOT, of cliffhangers. Not to mention the storylines, which are sometimes a little bit hard to follow. The show also airs on Tuesdays, but the last episode was in december. So I had forgotten a lot. And watching it again, after such a long time... I truly want it to be on air every week! Actually, that might be every day. ;-) Though it might get to complicated then. The show stars Sarah Michelle Gellar in a double (or maybe triple) role as twin sisters. And she does it so well. She truly is the most wonderful actress I have ever seen. I fell in love with her as Buffy Summers and it so good to have her back on tv again. With every movie I see she amazes me, but this show really steps it up. There is so much intrigue and the way she plays Bridget so differently than Siobhan... It gets me every time. Well, anyway... Every episode has me going 'Oh my God....!' a couple of times and I don't have it that much. I also wonder what on earth they (the writers) are going to do the next time. I can't wrap my head around it. But I know that I'm very exited about it and, right now, I really do wish that Ringer will have many seasons to go.