One of my favorite writers of this moment is Amber Benson. I know her from the series Buffy the Vampire Slayer, where she played the role of Tara. But she's so much more than that. Not only has she made independent movies such as Chance, Lovers, Liars and Lunatics and Drones. But she also writes. Boy, does she write! And I LOVE her writing. I got the fourth 'Death's Daughter' novel for my 24th birthday, called How to be Death. I couldn't wait for the final book in the series, which I just got for my 25th birthday :D. She's also wrote Ghost of Albion and Among the Ghosts. Great works, that really deserve a read. I like her writing, her use of words and all the supernatural elements that surprise you. So in this blog, I will talk about the five books in the Death's Daughter series, just because I love it and because I can :-).

Death's Daughter
All Calliope Reaper-Jones wanted was a normal life: buying designer shoes on sale, dating guys from Craig’s List, web-surfing for organic dim-sum for her boss... It's the reason she used a forgetting charm to stay clear of her real life. But when her father—who happens to be Death himself—is kidnapped, and the Devil’s Protege embarks on a hostile takeover of the family business, Death, Inc., Callie returns home to assume the CEO mantle— only to discover she must complete three nearly impossible tasks in the realm of the afterlife first.

One of the things I absolutely love about this book is that Callie is more of an anti-hero. Yes, she's immortal so she can't really die, but she's very human as well. Her character is sarcastic and sassy, she struggles during the fights, cares a lot about fashion... And she does what she must to save her family. Even though the story is set in today's world, Benson uses greek mythology, theology and hindi, which makes the story even more fantastical. The story is exciting and amazing, the supernatural world goes beyond your imagination and the characters are awesome. In my eyes, Callie's world is the best fantasy world to get lost in.

Cat's Claw
The second book in the story goes a bit further. Calliope Reaper-Jones is Death's Daughter, this we know. But now she owes a debt to Cerberus, the three headed dog that guards the gates of hell. And this debt involves many things, such as a trip to Purgatory, Las Vegas, ancient Egypt and.... a discount department store that's even more frightening than any supernatural creature she'll ever encounter.


Callie's talking pup, Runt, was amazing in the first book. You immediatly want one of those dogs for yourself, but I also love cats. So I immediatly was interested in the book. Sad to say that the immortal Callie is actually allergic to them... Anyways. It's also about Egypt, which I like very much. I've always been interested in Greek mythology as well as ancient Egypt, the way they lived out there and the cultures/beliefs they had. Benson addes this to the story which makes the fantasy world even greater, with more different mythological creatures. Every books keeps you hungry for more. To see how Callie will handle the next thing, as well as how the other characters will grow and help her. 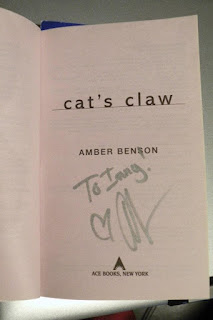 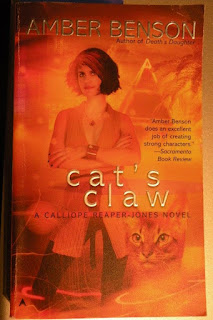 (My signed copy of her second book! )

Serpent's Storm
Callie is still trying to stay away from the family business of Death Inc. while wanting to achieve her dreams in the Big Apple as a normal working girl. But no matter how much she tries to stay away from daddy's coorperation, it just keeps hunting her. Especially now that her older sister, Thalia, has made a deal with the Devil himself, to engage in a hostile takeover of both Death Inc. and Heaven... once they can get Callie out of the way.

Sisterly rivalry... Who isn't familiar with it? I myself have two sisters (I'm the middle one) and this book focuses - more than anything - on family ties, on backgrounds. Not just of Callie, but also of her boyfriend, her boss and her sisters. I especially love Clio (the younger sister) and all the discoveries Callie makes about her own childhood. There's also this big discovery that Callie and Daniel aren't the only ones in the running for Death... A third person is introduced. This book is bloody brilliant and exciting, a little darker then the other ones. It was supposed to be the last one in the series, but it was such a succes that two more books were added. You'll never get enough of it!


I couldn't upload the vid I wanted so just watch it here. It's Amber Benson reading from her third book, with someone else and.... it's a sex scene!!!!! It's hilarious, just watch it ;-)

How to be Death
By now Calliope Reaper-Jones is the official brand new President of Death, Inc. But nothing ever comes easy. The Board of Death is breathing down her neck and her dad's copy of How to be Death (A Fully Annotated Guide) remains unopened, so Callie is really feeling the tension. To celebrate her newly found position, there's a formal dinner being held, but during this fancy dinner the guide book is stolen. So not only does Callie have to figure out how to be boss, she also needs to find the book before the powers it holds get out and destroy humanity forever...

This book was something: A whodunit! Who doesn't like that?! I loved it. It's totally different in the way it reads and Benson knows just how much information to give away and how much to hold back. Issues such as (ex) boyfriend troubles, living up to expectations and murder are all included, just like many of the favorite characters (Runt!!!) and adding some new ones. It's an absolute joy to read!

The Golden Age of Death

This book resumes where How to be Death left of. Callie is still the reluctant head of her father's company, Death Inc. To say it in her words: "I was gradually learning how to be a businesswoman. Had the power suits and shoes down, though the day to day was slow going. Then I was blindsided by Enemies Unknown and sent off to I-don't-know-where. Not a good thing. Now not only must my friends and family be frantic, but without a CEO, Death, Inc., can't function. With the newly deceased left free to roam the Earth, it's a zombie apocalypse come true." Safe to say... the world needs Callie back for another adventure!

I got the final book in the series, The Golden Age of Death, for my birthday this year and just started reading it. So I can't say much about it right now, except that I'm loving it. Big things are happening and worlds are colliding... I can't wait to see how Calliope is going to challenge this one. I'll be sure to update this little section once I finished it ;-).

The greatest news yet? At the convention I attended in Octobre 2011, Benson mentioned that they are negotiating about making it a (animated?) series. I'm not if that is still in the works, but it sure would be awesome!

Amber Benson also has her own blog and gave some advice there about people who always say they want to write. It's good advice, so if you are one of those people, take a look right here.
Gepost door Unknown op 00:17