As I've posted before, I'm a big fan of the tv show Castle. I've already reviewed the previous books by Richard Castle (see here), but recently I've also read his latest book 'Deadly Heat' (given to me by a friend, also named Richard) as well as one of his graphic novels (only to find out that it's the second volume instead of the first). Anyway, I thought it was time to review these as well. So here's another update in the Castle column ;-) 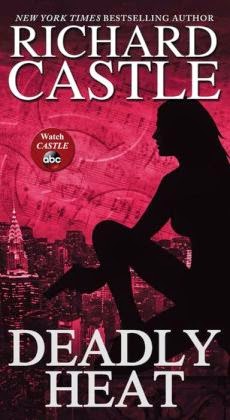 Deadly Heat
Deadly Heat is the fifth novel by Richard Castle about NYPD homicide detective Nikki Heat and journalist Jameson Rook and was released on September 17th, 2013. Picking up where Frozen Heat left off, top NYPD Homicide Detective Nikki Heat pursues the elusive former CIA station chief who ordered the execution of her mother over a decade ago. For the hunt, Nikki teams once again with her romantic partner, Pulitzer Prize-winning investigative journalist Jameson Rook, on their quest for the old spy and the motive behind the past murder unearths an alarming terror plot-which is anything but ancient history. It is lethal. It is now. And it has already entered its countdown phase. Complicating Heat's mission to bring the rogue spy to justice and thwart the looming terror event, a serial killer begins menacing the Twentieth Precinct and her homicide squad is under pressure to stop him, and soon. The frightening murderer, known for his chilling stealth, not only has singled out Nikki as the exclusive recipient of his taunting messages, he then boldly names his next victim: Detective Heat.

While I haven't done this with the previous books in this series, I'll give a short review about it, seeing how it is the final book mentioned in the series.*
If you watch the show, you might think you already know what's coming. But this book really kicks it up a notch. While there are certain similarities, it just counts as inspiration. This book dove deeper and deeper into the case of Heat's mother and it will have you in it's grasp as soon as the ball gets rolling. This, however, takes some time... Luckily only for a couple of chapters. As it turns out, the answer to her mothers murder has been right in front of her nose - just like on the tv show - all this time. Next to a captivating story, you also get to enjoy characters that you've know throughout the entire (book) series as well as get introduced to some new ones. While the references to the tv show are a little bit more subtle, there still plenty enough to enjoy. All in all this book was a good read and a fitting closure to the series.

You can find chapter one online!

* Just recently I found out that there's gonna be a new Nikki Heat novel, Raging Heat, about to be released on September 16th, 2014. 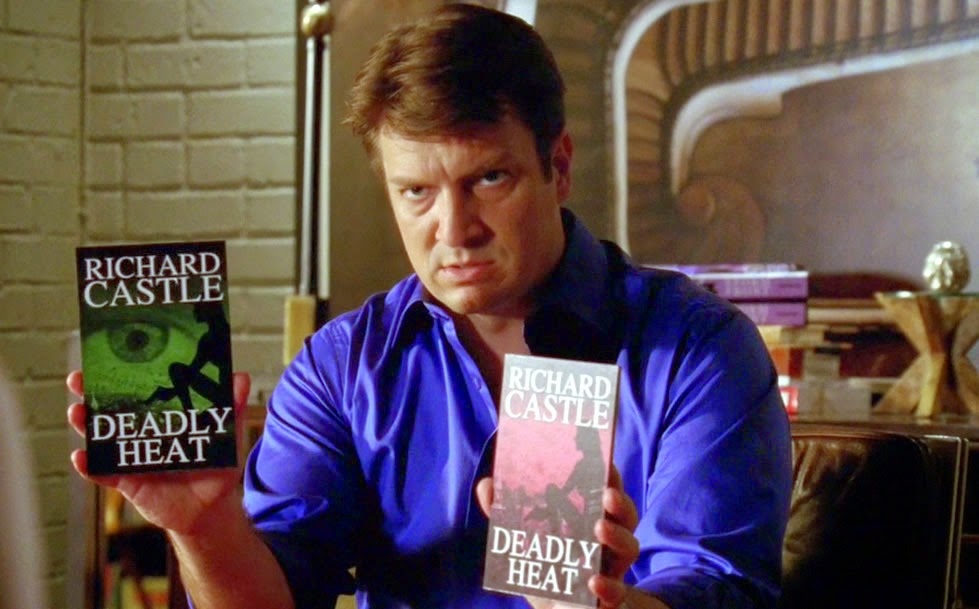 Here are some of the references I (think I) found:

- Page 67/8: Rook says "There's an app for that?" to later be answered by Raley "There is an app for that" This is a reference to the episode 2x17 'Tick, Tick, Tick' where Becket's team works with the FBI. Agent Jordon Shaw sends a copy of a fingerprint to her lab by app to which Castle says "Wow, there's an app for that?" and Jordan replies "That's why I joined the FBI, Mr. Castle. For the toys."
- Page 68: On this page there's both a reference to Darth Vader and the quote "Check the Adam's apples" which I'm sure was said by Castle and Espo, but unfortunately I wasn't able to trace back in which eps it was... So I might be mistaken here.
- Page 114: Rook finds Keith Tahoma playing chess in the park, very much like Beckett and Castle in 4x15 'Pandora' when they went looking for Dr. Blakely who was also a wiz with breaking codes.
- Page 115: While this isn't a direct reference, the Puzzle man says he met Rook at a Star Trek convention, which could jog your memory about the episode where Beckett and Castle are investigating a case that happened on a convention/comic con (5x06 - The Final Frontier)
- Page 133: Rook pulls out a bulletproof vest reading 'Journalist' much like the vest Castle pulls out in ep 1x06 (Always Buy Retail) which reads 'Writer'
- Page 153/4: Heat is investigating Dr. Nikoladze who has a dog business, which could gently relate to episode An Embarrassment of Bitches (4x13) where Castle and Beckett are investigating a death at a dog show.
- Page 154: Rook's talking about meeting with movie execs from Castle Rock about optioning 'the Heat pieces for film', which is also referenced to in the series in eps 2x17 (Tick, Tick, Tick - he strikes a deal), 2x20 (The Late Shaft - a girl is up for the part of Heat), 3x11 (Nikki Heat - where Natalie Rhodes shadows Beckett to get a feel for the character of Heat) & 3x22 (To Love and Die in L.A. - where Beckett and Castle pay a visit to the movie set).
- Page 146: During the movie talk someone says "Nathan would be perfect casting, if he's available" which of course is a reference to Nathan Fillion, who plays Richard Castle.
- Page 171: After the bioterror plot is revealed Rook gets told "Not a word about this" which is the same thing Adrian Pasdar/Mark Fallon tells him about a likewise terror in the two-parter Setup and Countdown (3x16 & 3x17)
- Page 171: Heat gets the compliment "You're beautiful like a model. Or Bond Girl." which is a reference to Stana Katic's role in Quantum of Solace.
- Page 191: Just like in ep 3x16 and 3x17 Rook manages to get his mother out of the city. Only in the book he doesn't have a daughter as well.
- Page 272: They are talking about the ripple effects of the bioterror, which relates to episodes 4x15 & 4x16 (Pandora and Linchpin) where someone like the Puzzle Man would calculate those risks.
- Page 272: Rook holds a gas mask over his face and breathed loudly saying "Luke, I am your fa--" As with one of the first references I mentioned here about Darth Vader, I wasn't able to find the ep in which it was used, but I do recall something like it being on the show.

- Other people working the case are Agents Yardley Bell (who's a strong reminder of Agent Sophia Turner, played by Jennifer Beals) and Bart Callan from the CIA. (page 106)
- Salena Kaye shows up, who's based on Serena from 4x05 - Eye of the Beholder
- The bioterror plot relates to the episodes 3x16 and 3x16, while
- 4x15 & 4x16 relate to the CIA storyline and a possible mole
- There are several 'references' to Castle as a show and/or character, just by using it as a name. For instance Castle Rock, but also Castle in the park on page 274.

In the acknowledgement Castle once again thanks the creators and actors of the show, as well as his poker buddies.

On the show
As with the previous book, there's not much mention of the books on the show. Except for the picture taken above where Castle discusses what the cover should look like (5x24 - Watershed (I believe)).
In 5x03, Secret's Safe With Me, Beckett also makes a promise to someone that Castle will name a character after that person's mother in his next book... Even though this would have been his next book, I couldn't find the name 'Eunice' unfortunately - which was the mother's name. 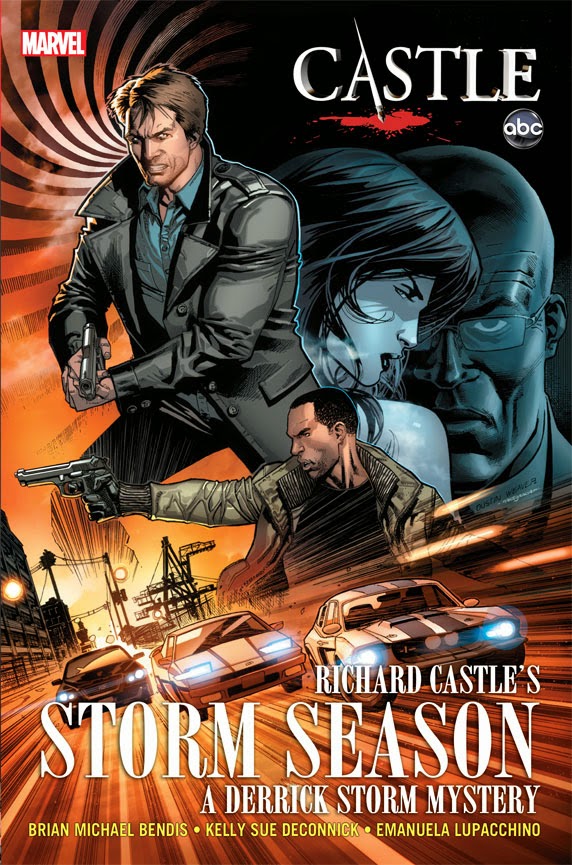 Storm Season
Derrick storm is a private detective and is hired to look into the case of a missing girl - but what should have been a routine mission quickly spirals out of control when Storm overhears the woman's terrifying scream on a wire. Plagued by the victim's helpless cry, Storm - despite an ominous warning - investigates. Soon, he'll discover an international conspiracy reaching further than he ever imagined - and perhaps the truth about Clara Strike, a CIA agent the world thinks is dead...
Richard Castle's Storm Season is the sequel to the critically acclaimed, best-selling graphic novel Richard Castle's Deadly Storm. This "adaptation" of Derrick Storm's second novel probably continues the storyline. Even though I missed the first one, I imagine that's the graphic novel in which Clara Strike has an accident. As I'm pretty new/green in the graphic novel/comic world, I unfortunately can't really review it on those aspects. While I grew up with comic books such as Kuifje (probably better known as TinTin), Asterix and Obelix, Suske and Wiske and lately have been reading all the Buffy comics I can find, I don't feel I know much about the graphic novels from abroad. That being said: 'Richard Castle's Storm Season reunites the lauded writing duo of Brian Michael Bendis and Kelly Sue DeConnick (Richard Castle's Deadly Storm) for their second Castle story, and the dynamic artwork of rising star Emanuela Lupacchino (X-Factor) brings the world of Derrick Storm to life like never before.' I really like the artwork: It screams action and has a somewhat darker feel. As a lot of the scenes take place in shady places, this works perfectly. It also fits with (what I know of) the Private Eye sector. All in all the story is very fast paced and easy to follow. You will find many strong female characters and they are all funny in their own way. To top it off, Storm works with his father which is a nice change of pace from the Castle/Heat series. The only negative thing I can say about Storm Season is that it's simply to short.

Though I couldn't really find direct references to the show in the storyline - which would be logical - there is the fact that Castle mentions in episodes 4x15 & 4x16 that he got in contact with CIA Agent Sophia Turner for inspiration for his Derrick Storm novels. This character plays a big role in the comic as well.
Other than that the first comic is referenced in 3x24 (Knockout), where Castle shows advanced art for A Deadly Storm, and in 4x02 (Heroes and Villains) you can see the first stand with Richard Castle's Deadly Storm graphic novels. You can also find issues of this particular graphic novel (Storm Season that is) in episode 5x06 (The Final Frontier) during Becketts and Castle's visit to a sci-fi convention (SuperNova Con), where Castle is signing copies.


You can read the graphic novel yourself here That's about it, I hope you enjoyed more of the meta of Castle ;-)
Gepost door Unknown op 19:46