I saw this Dutch movie two summers ago, called 'Zomerhitte' or translated it would be 'Summer Heat'. And yes, that's right. Two summers... I sometimes get behind on my blogs, or something more fun comes along and I do that first. In this case, it's called Summer Heat, which we're finally experiencing right now, and therefor I felt it was a blog that I should post now ;-). It might be dated, but I couldn't let it go. It's a good movie and I also really wanted to write it, because Jeroen Willems is in it. He's so amazing and this was a nice way to give him some of the attention he truly deserves. 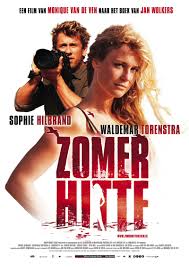 Storyline
Bob Griffioen (Waldemar Torentstra) is a photographer. He used to go to war areas and take pictures there, but after an incident, he switched to nature photography. Near the beach on the island Texel he's taking pictures in the dunes, until he sees the naked Kathleen (Sophie Hilbrand) emerging from the sea. From the first moment he's completely taken with her and can't let her go. That's why he attends parties (uninvited), to be with her, where she socialises with an older man, 'the Mummy' (Johan Leysen). A very possessive and jealous man, who decides to take action against Bob. Bob's only friend is the mysterious Federico Federici (Jeroen Willems), because even though Kathleen seems to be interested in Bob, it's unclear where her loyalties lie.

Act and direct
Monique van de Ven is mostly known for her acting (such as Turks Fruit/'Turkish Delight' (1973) written by Jan Wolkers, and her first movie as an actress). Summer Heat is her debut feature film as a director, for which she chose to do this book - also written by Jan Wolkers. Before watching this movie - which was made in 2008 - I read a lot of negative reviews, so my hopes really weren't that high. It's one thing to act, and another to direct. But I really enjoyed the movie. Yes, the acting and directing could have been better, but it wasn't like it was bad. The lead actors, Torentstra and Hilbrand are married in real life (still, I believe), and this could have been tricky, but they did a good job. Their performance wasn't magical, but that's mostly because of their lines. There was a lot of playfullness in their eyes which was very enjoyable and it also makes you question who to trust the entire time of the movie.

Suspense
Books and adaptations are never exactly the same. This movie is no different. The opening of the movie has been added to the story, as has a part of the ending. But what stayed with me during the movie was not the cheesy dialogue or just the weird way conversations seemed to go, but the suspense. The story is very strong and keeps you guessing, and that is why I really enjoyed this movie. It's got a lot of good elements (the beach, drugs, sex, trust, decievement) and even though some of the parts might be lacking, all of it put together makes a good and enjoyable movie. Especially if you love suspense in a movie and are looking for something that feels like summer.

Jeroen Willems
I also couldn't let this go by without writing something about Jeroen Willems. He's an amazing Dutch actor, that I actually interviewed over the phone last september. He's the kindest, sweetest man, with an amazing voice. He also stars in this movie, but he died a little while ago. He was actually rehearsing and collapsed on stage. This was one of those moments where you hear the news on television and go 'No way....' and you're just at a loss for words. He was only 50 years old. Jeroen Willems was an amazing singer and actor and may he rest in piece. Here are two beautiful songs he once performed (the Dutch version of a French song by Jacques Brel and the Dutch song by Frans Halsema). I went to his show during the Dutch Film Festival and it was very memorable, emotional and touching.

The thing is, even after he died, a lot of his movies came out. He was so busy working that all these works were in the stages of post production. These movies/shows are: De Wederopstanding van een Klootzak (sorry, don't know the translation), Boven is het Stil/It's All so Quiet, Tula: The Revolt and the show (again no translation) De Ontmaskering van de Vastgoedfraude. And I'm sorry to say that I'm so behind on movies, that I haven't seen any of them. But at least I still have a lot to look forward to. Especially It's All So Quiet, because it has been said that that is one of his finest movies and the first one where he played the lead.

Well, I hoped you enjoyed this little summer blog and that all of you are going to have a wonderful time during the summer!