I believe I've mentioned it once before: How this (new) amazing show Revenge reminds me a lot of Point Pleasant. I loved Point Pleasant... An incredible television series that lasted only one season. Just look at the credits, I mean, come on: This is awesomesauce.


Point Pleasant
This show first came to my attention because Marti Noxon co-created it (she was a writer/co-producer on Buffy). Point Pleasant tells the story of a little town by the sea where a girl, Christina, is stranded. Unconcious she washes up on the beach and a handsome lifeguard, Jesse, brings her back to life. Afterwards the girl with no memory of her life is taken in by the family of the local doctor, the Kramers. There Christina befriends their daughter Judy. The story mainly focuses on Christina's search for who she is and what happened to her mother. Along the way it turns out that she's not just a girl, but she has an effect on the other towners. She has a mark... and it turns out she has a very powerful father. But will Christina be able to resist the origin of her father? Or will she give in and possibly bring about Armageddon?

I loved this show because it's very scary, kinda gothic and exciting, with supernatural things going on. Characters you'll learn to love (or hate) and a couple of familiar faces like (Elisabeth Harnois/Christina - from Charmed/OTH, Adam Busch/Wes - from Buffy/TSCC, Dina Meyer/Amber from Friends/Castle, Clare Carey/Sarah from Charmed/Revenge)


(Notice Marc Blucas -Riley from Buffy- playing her father here.
Unfortunately he was recast in the show)

Revenge
I read that Revenge is inspired by The Count of Monte Cristo. And once I knew that, I began to see it a lot more. It's still very different though, but the main motive in the story remains the same, which is .... (how did you guess?) Revenge! This show is about Emily Thorne (who changed her name from Amanda Clarke). She grew up in a priviledged environment, but her dad was framed of being a terrorist which put her father in jail and her in juvy (?). Now in her twenties she moves back to The Hamptons - after her dad has died in jail - and sets forth to destroy all the people who had something to do with framing and/or killing her innocent father. She has to do all this, without being made...

How they are different
Well, for one, Point Pleasant is about God and the Devil. The ultimate fight between good and evil. So there's a supernatural meaning of sorts. Revenge is a modern adaptation of The Count of Monte Cristo, which is about getting revenge for having everything been taken away from you and hurting the people that that person cared about. When you put it like that, it doesn't sound anything alike. Revenge also plays in the Hamptons where 'everyone' is rich, while Point Pleasant is simply a small little beach town where nothing big ever happends. Well... You know, until Christina arrives :P.

And yet the same...
They both center on a blond girl who's 'new' to town. They both fall in love with a very loved person - in that community - as well as handsome (and they actually look a little bit alike if you ask me) and both ladies have a rich man on their side. As the shows go along, they are also both caught up in their own little mysteries. Another thing is that it is situated by the ocean. A lovely place for things to happen, as well as go terribly wrong.
Their soon to be boyfriends have friends with a questionable background and appear to be violent. Both ladies have a mark that identifies them and even the credits are a little bit alike in a way (except that Revenge is just a still, while those of Point Pleasant are actual credits).
That's the short version anyway... If I can think of anything more, I'll be sure to add it to this blog ;-). 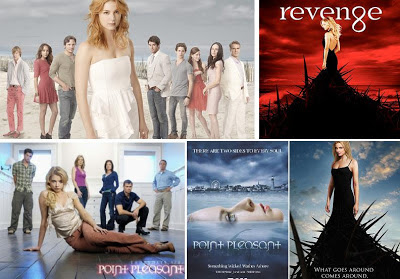