My second year of Glow

As with a lot of movies, the sequel is not always as good as number one. This was also the case for me at Glow. There were some beautiful things, but not everything was at the same level as last year. Part of me simply thinks it's a waste of energy and bad for the environment, but the other part of me just loves to be amazed by the beautiful lights and the things that can be made with it. This year there was a special section where you could interact with things. You could play Tetris with your body (kinda like a Wii-game I suppose) and the lights. There was another little portable Ipod thing, but it had extra screens so you could watch real 3D on a small screen (I loved that!), you could also go to a website on your cellphone after which your phone would get a color. By using/moving your phone the color would do the same on screen. There was a lot of art as well, kinda like stuff from Esscher and it played with your perception. There was also this: 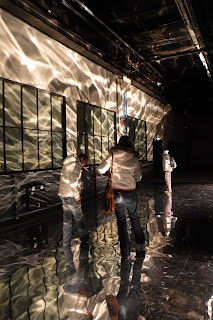 Under the silver ground there was some kind of foam, which made walking on it very cool. The lighting on the wall was also impressive. Other things in this section was a laser show that responded to your voice and a projection on a building that also did the same. Only this time it was mostly squares that flew up and made interesting moves on the building. 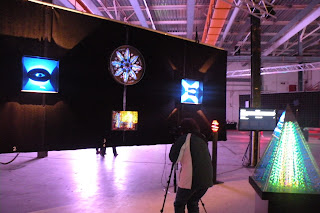 (The art in the first section - with UV-lighting)

When we got back to the real tour in the city, there were a lot of projections. We didn't do any of the side projects because I did have to go back to Utrecht on time (sidenote: This year I also went with my parents and my sister and her boyfriend, instead of just with my dad like last year). We also saw this: It was some sort of story that began at the roof of the building and it was about someone running from something (possibly the cops). I thought it was amazing and looked really good. Check it out here:


One highlight is always the church. I didn't get a good vid of it, but luckily I could find it on YouTube! I also have a picture myself ;-). 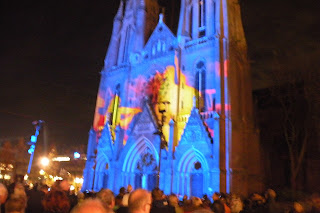 The other highlight was the flowerbeds. It wasn't the actual end of the tour, but I thought it was so pretty that I would like to end this post with it. Every year the city of Eindhoven asks children to make something themselves. This year they made flowers, like a whole bunch of them! It was such a pretty sight (sorry that the pictures are crap :S). 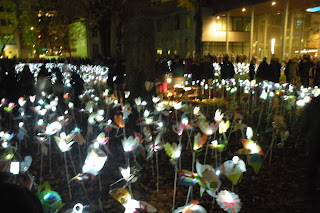 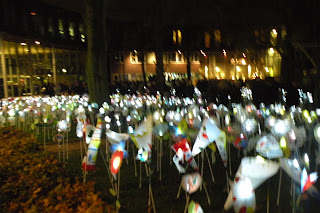