This morning I woke up to the devastating news that Cory Monteith died yesterday at the age of 31. The Glee-star was found yesterday at noon at the Vancouver Fairmont Pacific Rim hotel. I'm not the kind of person to fall in love with characters, or at least not in the way that a dedicated and devoted fan of a show does (not since/like Buffy anyway). But this news touched me deeply. Not only am I one of the millions of people who could enjoy his wonderful voice and his amazing talents on Glee, but he always seemed like a very happy man who enjoyed life. With his 31 years, he definitely belongs in the list of stars who died to soon (like James Dean and many others).


The news report
It's been all over the news, like The Hollywood Reporter and BBC news, you name it. The police found out that Cory spent Friday night with friends, but came back on saturday morning by himself. When he missed his check out time at noon, the hotel staff went up to his room and found him. He was probably alone when he died. While cause of death hasn't been determined yet, the police don't expect foul play and they are questioning the friends who were with him the night before. It's unclear whether or not Glee castmates or his longtime girlfriend and co-star Lea Michele were with him.


In March this year Cory checked himself into rehab for substance abuse. Which wasn't the first time. When he was 19 years old, he had checked himself in as well. Many websites are now speculating that Cory possibly died because of a drug overdose. But let me just say that the police haven't said anything yet.


His big grin
When you look at pictures of Cory, you will always see his big smile and grin. It's hard to believe that someone like that is gone. Or that he even had a hard time in life. I first read the news on facebook and twitter and I went to check out his twitter account. His last tweets are so innocent that it hurts to read them. It shows just how totally unexpected this whole thing is. I checked out some of his tweetpics as well and they are simply heartbreaking. A picture of his girlfriend Lea Michele (Rachel Berry from Glee), from when he first learned her how to snowboard. And even further back a picture from him with some of the Glee cast at San Diego Comic Con... They are all memories that show who and what he's leaving behind. His family, friends, fellow castmates from Glee. Sure, fans share this pain. But the people who actually knew him... You really can't imagine what they are going through. THR has an entire list of tweets about his passing. 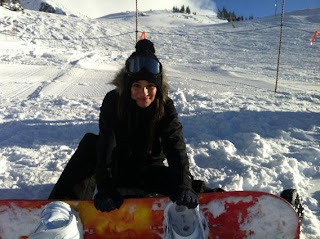 Fans are also retweeting messages Lea sent to him or things she said in interviews about their relationship. It makes his passing even more heartbreaking, especially now that everyone is sharing the picture where they announced they were getting married. 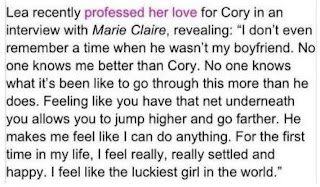 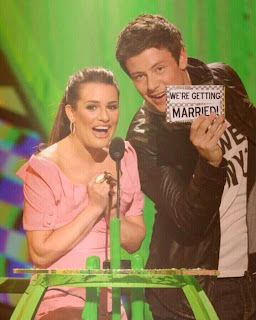 20th Century Fox shared: "We are deeply saddened by this tragic news. Cory was an exceptional talent and an even more exceptional person. He was a true joy to work with and we will all miss him tremendously. Our thoughts and prayers are with his family and loved ones." 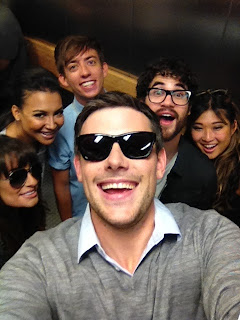 In Glee
Since the beginning of the show in 2009 Cory Monteith played teenager Finn Hudson. A teenager with lots of problems but finally found happiness in Glee Club and his relationship with Rachel Berry (Lea Michele). In season four Finn and Rachel had broken up and we saw way less of him in the show. Glee producers, the network and Lea were all supporting him during rehab. It was the reason why he appeared in less episodes than originally planned. Through everything in the show, one thing always remained clear, which is that these two characters belong together. I remember thinking: "Finn and Rachel are one of those couples who have to endure a lot, break up, but will marry in the final episode of the series", because everyone knows that they are THE couple of the show. When I heard this news, my thoughts also went to the future of Glee. How will this affect the show? Cory is an amazing talent with a beautiful voice and we will always feel this loss. THR wrote that it's unclear how the sudden death of Cory will influence the production of Glee. The first episode of the fifth season is to premiere on september 19th... And he was supposed to be a series regular again. When tragedy strikes, in real life, it will undoubtedly come back in the show. I already know, that no matter how they do it, it's gonna be a tearjurker of an episode.

The internet is already filled with pictures, videos and sweet messages about Cory. The proof that pain and loss can be shared throughout the world. Everybody has their own way of honoring someone or remembering them. That's why my sunday will now be filled with writing this blog and watching several Glee episodes (like the Pilot or 3x22 Goodbye) and listening to their Glee songs.

Cory Monteith, may he rest in peace.

(A couple of great Glee performances)